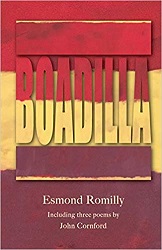 Free postage and packaging within mainland UK. Customers in Northern Ireland, the EU and Rest of World please order through your local bookshop.

Esmond Romilly (1918-1941) was Winston Churchill’s nephew and rumoured to be his illegitimate son. Already notorious as a teenage runaway from Wellington College, Romilly was among the first British volunteers to join the International Brigades in Spain, cycling across France to fight on the side of the Spanish Republic against Franco’s insurrection. He saw intensive front line action in defence of Madrid, culminating in the battle of Boadilla del Monte in December 1936.

Written on his honeymoon in France after eloping with Jessica Mitford in early 1937, this is his personal account of those events, in which many fellow comrades lost their lives. As well as a highly readable and moving memoir, it has served as a primary historical source for many leading scholars writing about the Spanish Civil War, including Paul Preston, Hugh Thomas and Anthony Beevor.

This annotated edition includes an introduction and an appendix with three poems written in Spain by the poet John Cornford.